One minute it’s Memorial Day weekend, with the entire summer stretching out ahead of you. Then, suddenly, it’s Labor Day weekend, and like the fabled grasshopper, you rush to store up summer memories and pack as much into each day as you can. And now it’s over . . . . . but wait, there are still a few golden late summer weekends in store. And, while you might not want to actually take these to the beach (the sand! the sunscreen!), these are perfect choices for a long, leisurely session of design inspiration. We’ve picked some favorites, so prepare to be swept away!

Outside In: The Gardens and Houses of Tichenor & Thorp celebrates the work of Los Angeles-based husband-and-wife architects M. Brian Tichenor and Raun Thorpe, whose projects emphasize the conversation between architecture and landscape, interior and outdoor rooms. Their design vision and inspirations are illustrated not only with spectacular photography by Roger Davies, but also with Brian Tichenor’s lovely watercolors and renderings. Go-to architects for many West Coast AD100 interior designers, the homes include a Las Palmas contemporary Spanish courtyard house and gardens, a Bel Air estate and grounds with French-Norman influences, a hilltop hideaway overlooking the Pacific Ocean that evokes a Portuguese quinta, a Pasadena estate imbued with John Sloane-inspired details, a renovated Harwell Hamilton Harris house in Holmby Hills, and two luxe contemporary Manhattan apartments.

Tichenor & Thorp’s Holmby Hills residence was designed by California modernist architect Harwell Hamilton Harris. Harris began his career in the offices of Richard Neutra, and the influence of his mentor is distinct in what Brian and Raun have coined “a Case Study body with a Frank Lloyd Wright roof.” The living room is furnished with a mix of mid-century pieces such as the vintage Monteverdi-Young chairs, classic contemporary forms and Asian furnishing and objects, and anchored by a deep blue rug, meant to evoke a swimming pool. The table is vintage Paul Frankl. Photo by Roger Davies

The historic Las Palmas section of Palm Springs is the setting for a creamy, luminous living room that takes ultimate advantage of Southern California’s much-coveted indoor-outdoor living. Massive, bronze-framed French doors open to the patio, and a carpet of irregular quartzite paving stones spans the indoor-outdoor transition, their random shapes contrasting with the strong geometry of the structure. The homeowners have on display a significant collection of works by twentieth and twenty-first-century California artists, so walls were intentionally kept simple. Interior decoration by John Cottrell, photo by Roger Davies

A client’s twin fascinations with the great Regency architect Sir John Sloane and the theories expounded in Christopher Alexander’s 1977 A Pattern Language were combined and brought into focus in a Pasadena house and gardens. The interiors were one of the final decorating projects of the late acclaimed interior designer Joe Nye. Walls of terra rossa Venetian plaster combined with ebonized moldings and a ceiling of gold tea paper are a dramatic setting for dining. An antique English three-tier dumbwaiter is at the rear left corner, with a mahogany Chinese Chippendale tea table opposite. A pairs of Regency armchairs and side chairs are interspersed with Louis XVI dining chairs around an English Regency dining table. The mantel continues the Sloane theme.

Francophile clients in Rancho Santa Fe asked for their period rooms to be updated from eighteenth decor replete with tassels, buttons and formal seating, to a more current and modern look. The furniture plan began with a modern rug, and the wall colors were lightened, keyed to the background tones in a pair of Barbizon paintings. The coffee table is by Maison Jansen. Photos by Roger Davies.

© Outside In: The Gardens and Houses of Tichenor & Thorp by M. Brian Tichenor and Raun Thorp with Judith Nasatir, The Vendome Press, New York 2017 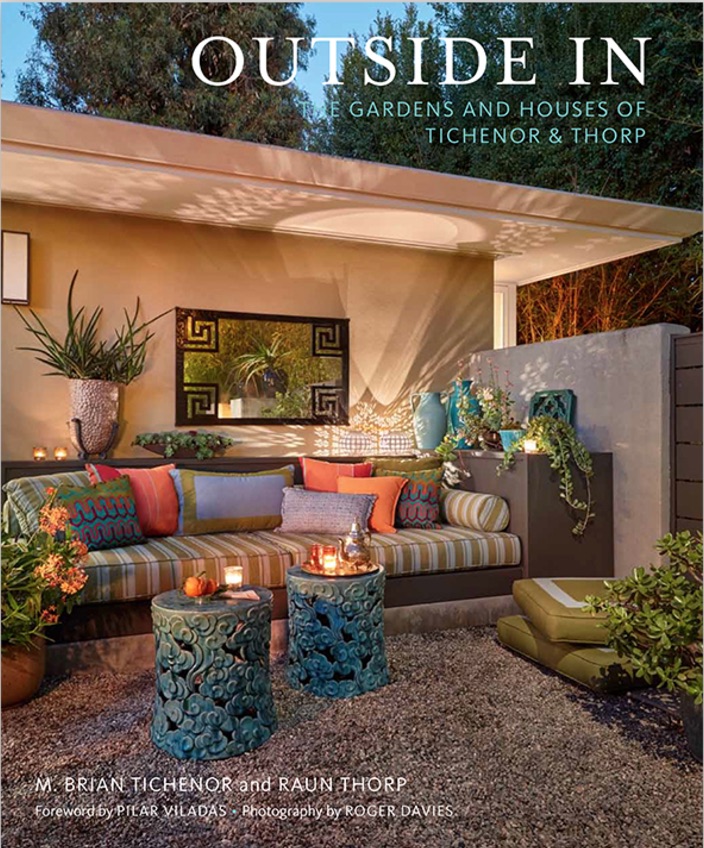